In 1726, 20 year old Benjamin Franklin devised a system of 13 virtues for the purpose of developing his character. Nearly 300 years later, this character-building system creates one of the most productive figures in American history. So why do Franklin’s 13 virtues even matter? In my opinion, these virtues (at least some anyway) can be related to the values of sustainability.

For the past 19 years of my life, I have been searching for meaning in life. I vividly remember both of my parents telling me I would be good at this job or I should consider this profession. But I always wondered why the importance of finding a job even mattered. A little over a year ago, I discovered a movie on Netflix called Minimalism: A Documentary About the Important Things. In that film, the storytellers were two guys who had realized that their life of consumption was not meaningful which resulted in years of sadness. As a result, when both of them found the idea of minimalism, they were able to live a purposeful life without having something holding them back. To me, watching that film opened my eyes to focusing on what really matters to me. As a result, that search of a purpose reminded me of an age old system of 13 virtues that I read in middle school.

When Benjamin Franklin wrote this system back in 1726, his goal for the virtues were to build his character which meant focusing on the important things in life. His set of virtues allowed him to become an author, a scientist, a politician, and a founding father in American history. In essence, these virtues were a model to help me find focus in my life. For instance, as a sustainability science major, my goal is to help find solutions that will help future generations prosper. I realized that in order for me to work on attaining this goal, I need to live a sustainable lifestyle. Minimalism helped me attain this goal by focusing on one of the key virtues that Franklin stressed, frugality. As Franklin put it, frugality means to “waste nothing.” In relation to sustainability, I believe frugality can be important in lessening consumption around the world. In the United States alone, 23% of the world’s energy consumption is used when Americans make up only 5% of the world population.

From a personal perspective, I follow a frugal lifestyle by not succumbing to the pressures of consumer culture. So when I purchase anything, they are only the essentials. Of course, teaching Americans to be frugal in a consumption-based economy would be a tall task, but from my personal experience of it being a useful skill, I hope that people will listen to the wisdom of a founding father. Some may believe that being frugal may reduce their quality of life, but I believe that my quality of life has improved because I am able to focus hobbies that matter to me.

Overall, as much as these virtues are a benefit in my life, I felt that this topic would be a good way to start the blog for the summer year because of the benefit it could bring to everyone. As an American, I follow a set of laws that dictate how I may live as a citizen. But I also feel that it is important to have a personal set of guidelines that dictate what matters to you. However, I believe (in my biased opinion) that one of those principles should be living a sustainable life. 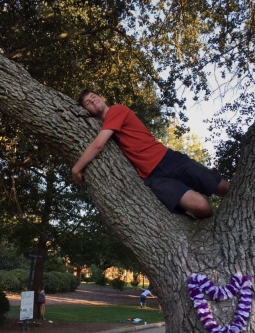 Austin Powell (20') is a sustainability science major from Greenville, South Carolina who is interested in politics, history, sports, and the outdoors! View all posts by Austin Powell

Search “The Green Scene at Furman”